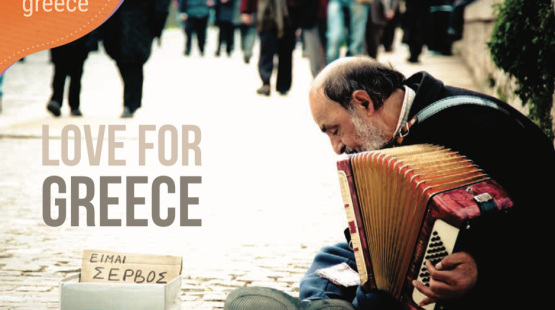 Since May this year, Arianne Tassios has been helping out at the ECM office in the role of Mobilisation Support. Growing up as a Greek Australian, Arianne brings special insight into the needs and unique challenges of reaching Greeks with the good news of Jesus. She shares here some of her thoughts.

My love for the nation of Greece comes through my ancestry, being born to Greek parents. As a child growing up in Australia, I became a fluent speaker and was immersed into Greek culture, values and mindset. I am proud of my Greek heritage: its loyalty and commitment to the family unit and its high regard for social and moral order. Greeks speak passionately of things that matter to them. They have a well-known reputation for hospitality, cooking delicious food, and lively music. While Greek people have been through many shifts in their national history and culture, they have managed to maintain their strong ethnic identity.

In matters of faith, if you are Greek, you are automatically considered a member of the Greek Orthodox church and if you are not, you should be. Anything other than Greek Orthodoxy is considered heresy that should not be taken seriously. A long standing tension between Orthodoxy and Evangelical Christianity was birthed during the time

of World War 1 and 2, where Greeks were forced to either give up their faith or die for it. Preserving their Orthodox faith during times of peril, poverty and hardship is why it is now so embedded in their identity.

Attending church is not so important in big cities, although it is more common in rural areas and smaller towns. Many Greeks do not own or understand the Bible and exploring it deeply is not encouraged. The things of God are rather left as mysteries in the hands of priests.

When I’ve asked some of my family members about their assurance of salvation, the heart- breaking answer is often ‘I don’t know’ or ‘Only God knows’. Whenever a deceased person is mentioned, it is followed by the phrase ‘Lord, forgive him/her’. The lack of assurance of salvation poses a big problem to the future of Greek people.

There is a yearning to hope, yet a fear in finding out or letting go of what has always been. They think if they just keep doing what they have been taught to do, then maybe God will give them a chance to enter the kingdom.

On a plane ride from Crete to Athens, I was sitting next to a young man. He explained the current struggle for Greeks, particularly young people, who are hungry for hope. Pressure from family to make something of themselves has created burdens too heavy to carry. I spoke about the grace of God. He was amazed.

There is a harvest awaiting in Greece, with potential to see the gospel flourish in a place that was once so saturated with biblical truth. They need people who have been transformed by the love of Christ, willing to tell them of the abundant life God has waiting for them. The young man on the plane was so thankful to know that God was not a distant idea, but cares deeply and is willing to reveal Himself to those who seek him.

Greece is known as a top tourist destination with its historical and natural beauty. Yet underneath the surface it is broken and needy. Greece needs Jesus. Greeks need people to tell them about the freedom found only in him.

Our new ‘Consider Greece’ leaflet (see p.13) says: ‘Today Greece is in a strategic location for reaching out to the former communist countries of Eastern Europe, as well as North Africa and the Middle East. It is also a stepping stone for refugees travelling west, bringing a unique opportunity to minister to these people. While evangelicals are a minority in Greece, they are determined to press forward and continue what the Apostle Paul began in his missionary journey to a people who profess Christianity, but are in need of a personal knowledge of Jesus Christ.’

“There is a harvest awaiting in Greece, with potential to see the gospel flourish”

As ECM seeks to re-open a new ministry in Greece, we need short to mid-term (two to three years) missionaries to serve alongside existing Greek evangelical churches. This will range from holistic ministry to the poor, homeless and refugees, as well as meeting their spiritual needs by providing opportunities to present the gospel. All

this through a community of love and acceptance. For more details, visit: www.ecmi.org or www.ecmaustralia.org/service-opportunities