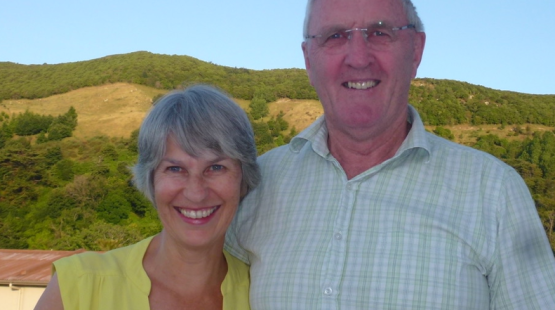 Féy Cotter’s husband, Murray, reached retirement age at the close of last year, and so they returned to New Zealand after 7.5 years of ministry in Albania. As Féy had some years still to go before qualifying for a pension, she prayed about what work she might do back in New Zealand.

“My heart’s desire was to continue working for ECM, but there were some barriers.

After we returned to New Zealand, we attended a week-long professional debrief. In one session we worked through the barriers we were facing regarding my future. At the same time, I was offered a half-time paid position with Bishopdale Theological College for one year. In addition to this, a significant number of our supporters encouraged me by committing to support me if I continued with ECM.

It was very hard waiting for God to guide, but I am now rejoicing that he gave me clear direction just at the right time. At the end of November, I moved seamlessly into working half-time for ECM and half-time for the Bible College. So far, the Lord has provided 75% of the support I will need for this year! I continue to trust him for the rest.”

With ECM Australia and New Zealand being across two countries, it is a wonderful provision to have someone like Féy working specifically in New Zealand.
She has been working on a ‘job description’ for this new role.

“I will be involved in three different areas of ministry. First I believe I am called to make the needs of Europe known in New Zealand, and to walk with other people as they explore whether becoming an overseas missionary is the right thing for them. If it is, I then hope to journey with them as they prepare and go. Secondly, I will continue to serve ECM International by leading the ECM Ministry Direction Group which oversees all the field ministry plans and financial projects. This is something I have been doing for the past five years. Thirdly I will be mentoring women who are serving in leadership positions with ECM.”