The Call to Missions 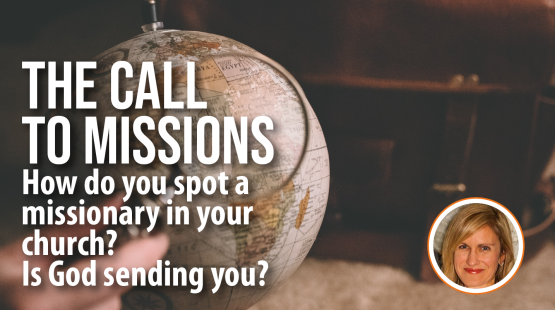 How do you spot a missionary in your church? Is God sending you?

Sam Boog has been working in Communications for European Christian Mission (ECM) in Australia for the last couple of years. She has a particular passion for Europe and is keenly aware of the needs there and the resources we have here.

The idea that one must be ‘called’ by God to become a missionary is a long-held but often misunderstood concept. Some would argue that the Lord only ‘calls’ people out of darkness and into his light, but most Christians would agree that God can also lead or guide his people to specific ministries and places. Many missionaries (now and in centuries before) believe they have received that call. This can take many forms and be discerned in various ways. There are some general principles though that may be helpful for church leaders to discern whether God is indeed setting someone apart in their church, and for ourselves as we seek to discern the Lord’s will for our lives.

The gospel is the message that God is reconciling the world to himself through the death and resurrection of the Lord Jesus. Missions then, is what carries this message to all nations; the job of the church between Christ’s first coming and his return. So in a very real sense this is the job of all believers. But ‘missionary’ is a unique term, usually referring to someone who preaches the gospel where the Lord Jesus isn’t yet known and worshipped. Paul is our best example of this type of missionary, “My aim is to evangelise where Christ has not been named, so that I will not build on someone else’s foundation, but, as it is written: Those who were not told about him will see, and those who have not heard will understand.” (Romans 15:20-22) From this definition, it’s clear that not everyone can be a missionary. But everyone can have a part in the bigger task of the Great Commission—by going, sending, supporting, or mobilising.1

Everyone can have a part in the bigger task of the Great Commission—by going, sending, supporting, or mobilising

Here are a few things to look out for:

Are they devoted to the Lord? Do they have a love for prayer and God’s word? It may seem obvious but a living and active relationship with the Lord Jesus is fundamental to growing in godliness and sensing his leading in our lives. It is also a vital component for anyone wanting to work in missions or survive on the mission field.

Are they teachable? Many missionaries have gone to the field as teachers only to find that more often than not they are the students... learning from God and from others. They also must be accountable on and off the mission field, willing to be rebuked, and to keep others accountable too.

Are they evangelists/teachers/ trainers/servants of God here at home? Candidates for missions must have at least some awareness of the gifts God has given them and be already using them in his service and teaching/training others to do the same. If they aren’t serving God here, why would they serve him in a foreign country with many more barriers and hardships to face?

Are they adventurous and prepared to take risks? Being a missionary means being prepared to go anywhere and eat anything for the sake of the gospel. It requires trying things and being prepared to fail. It also involves lots of travel and lots of waiting...

Do they get on well with other people? Are they a team player? Missionaries must be able to work in teams, often with Christians whose ministry philosophies and ideas are far removed from their own. How do they cope with hardship and suffering? Missionaries must be resilient, trusting in the Lord through hard times and good.

Finally would they have the support of their church? Would their minister vouch for them and support them? Making decisions in isolation is never a wise idea. The church community plays a vital role in raising up, identifying, encouraging and sending people who can be missionaries. In Acts 13:1-3, “while they were worshipping the Lord and fasting, the Holy Spirit said, “Set apart for me Barnabas and Saul for the work to which I have called them.” Then after fasting and praying they laid their hands on them and sent them off.” The Holy Spirit identified the first missionaries when the local church gathered. Just as biblical missions begets churches, the church is ordained to beget missionaries.

ECM missionary candidate and mobiliser, Ross McGaughran, says the affirmation and encouragement of the church is vital: “I am convinced that the whole process needs to be confirmed by the body of believers. So that as people talk with us in the initial phase of exploration and then further down the track as people offer to pray for us and/or give to us, they confirm God’s calling on our lives.” The Church is always the starting, continuing and ending point in all missionary endeavours, as God has ordained it. Mission organisations work alongside churches to support and empower missionaries to serve.

Above: Ross and Shona

ECM missionary, Chloe Wolfson, recently moved from one region of Spain to another after the prompting of fellow church members: “When people challenged me to consider getting involved I starting asking God for a specific calling to work with the trafficked or Muslims. But instead of giving me that sense, God changed the way I saw people... God reminded me that they are all people, people who need to hear of Jesus’ love. So as we went into lockdown I had a really clear sense that God had opened the way for a move to Roquetas de Mar.”

Simon Ball served as an ECM missionary in Ireland for over ten years. He says the Lord guided his steps as he walked out in faith and served. He had previously served on a beach mission for eight years and saw the Lord using his background in nominal Catholicism to reach many Catholics with the gospel. When he and his wife Danielle went to Bible college, they knew they wanted to serve the Lord overseas but hadn’t narrowed down where. Simon also has a rare genetic disorder that makes him allergic to sunlight, so that ruled out most countries in the southern hemisphere. Then they heard a compelling presentation about the needs of Ireland... “All the pieces suddenly fell into place. The Irish are an unreached people group, as only 0.6% of Irish nationals have a saving faith in the Lord Jesus. Most Irish are Catholic (88%), though like my family, are nominal and can even call themselves ‘Catholic Atheists’. On top of that, it rains almost every day in Ireland and sunshine is rare!” Simon says he never heard a ‘call from on high’ but the Lord obviously used his family background, experiences and even his genetics to ‘call’ him to Ireland.

Above - The Ball family

So being ‘called’ can look like different things to different people, conversations, answers to prayer, words of encouragement and affirmation of God’s gifting and guiding, conviction of scripture… Ross says Isaiah 6:8 spoke to him early on: “Then I heard the voice of the Lord saying, “Whom shall I send? And who will go for us?” And I said, “Here am I. Send me!” Whether God is ‘calling’ you to be a missionary is not the main question to ask. ECM National Director, Matt George suggests, “The big question for me is working out whether you are suitable to be sent. I think the Bible encourages us as individual believers and more importantly the Church to be fully engaged in God’s mission and so all rightly consider whether that means ‘go’. All disciples are workers in God’s harvest field (Mt 9:37-38) - the issue is working out what sort of worker to send somewhere else for the sake of the gospel. It’s the job of pastors in the church (often with the help of a mission agency or Bible college in many cases) to help Christians work through that issue, but the essential set of criteria does not include (as far as I can see) people feeling a special ‘call’.”—it’s about you and your church family assessing your abilities, circumstances, and desires in light of the global need.

This article was published in the 2021 Winter Edition of ECM News.

1. ABWE Canada “A Guide for the Journey”