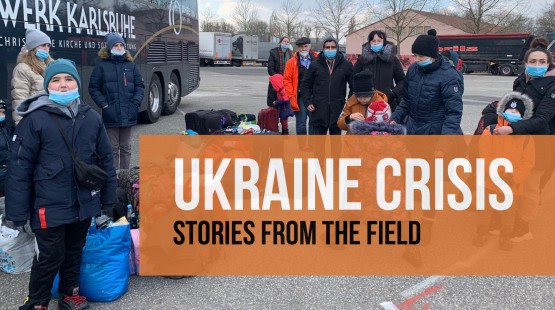 “Are we living in a vicious circle? Heartbreak - anger - energy - hope. And again. Heartbreak - anger - energy - hope. And again, and again, and again. At the beginning of this war, I prayed so hard that the Lord would give us a quick victory…Now I'm beginning to realise that most probably it's going to be a marathon and not a sprint. The question is, how many miles are still ahead of us? How many more hurdles do we still have to jump through? How long is this obstacle course going to be? How much more do we have to suffer? For how much longer do we have to fight?”
Roman Matviyiv, ECM Pastor in Ukraine

We have all witnessed the horror of the war in Ukraine as Russia invaded earlier this year. The impact on Europe will be felt for generations as they face the biggest humanitarian crisis since WW2. Around 7 million people are displaced, thousands already dead, orphans and widows in the wake.

The ECM team in Ukraine is mostly based in Lviv and made up entirely of Ukrainians. They have been caring for a steady stream of refugees as they make their way to Poland, Croatia, Romania, Germany and Slovenia. They are exhausted physically, emotionally and spiritually. They are experiencing the catastrophe first hand as bombs go off nearby and shops run out of food. There are lines of people outside pharmacies, fearful crucial medical supplies will dry up. Fuel is also very scarce and extremely expensive, yet the queues are long.

ECM workers from various nearby European countries have been doing bus trips into Ukraine with mattresses, food and essential items. They have been returning with refugees who are then cared for by the church. Our workers have reported that some non-believers who have been staying in the church have started joining in prayer times.

"In this devastating darkness, we as a church have a unique opportunity to shine the light of Jesus. So, we continue to give shelter to people, feed the refugees, and generally care for their needs."

New Hope is a church in Lviv led by father and son team, Stepan and Roman Matviyiv. They have been re-purposing their church to accommodate refugees:

“We are rebuilding our facility to help refugees fleeing from the central and eastern part of Ukraine. Our building can also be used by neighbouring civilians so that they have somewhere to shelter when the air alarm goes off. Our cafeteria has been re-purposed to house the refugees and we have built some makeshift beds. We have converted our classrooms into makeshift bedrooms and thankfully, people have donated sheets and pillows. We are also trying to provide somewhere for them to cook. Upstairs in our worship centre, we are planning to put some 30 or 40 beds which we still need to buy.”

Roman reports that the situation in Kyiv has been terrible. Half of the city’s population have already fled. Many remaining residents have been seeking shelter in basements, in dire need of food and water. Most people have been living without electricity, heat, mobile and internet services. He says despite promising that “green corridors” would be established for the evacuation of women and children, the occupants went ahead and bombed anyway, killing eight people, including two children.

On the outskirts of Kyiv is the city of Irpin, where Roman has a close friend. “Many of you have asked about my good friend, S., but he is safe. He and his wife left the ruined area of Irpin and were among the last evacuees. However, two years ago, Anatoliy, a young man from Severodenetsk, moved with his family to Irpin. His family has been actively serving at the Irpin Bible Church alongside S. Anatoliy sent his wife and two children to a safe place and decided to stay in Irpin to volunteer. He is one of eight that have been killed. He was helping a family with two small kids. None of them survived.”

ECM’s Vlad Kostornyy is of Ukrainian and Russian descent and has worked with ECM since 2018. Now living in Florida, he spends his time coaching and training church planters for work in Eastern Europe and Former Soviet countries. He says the food situation in Ukraine is beyond serious with many civilians on the brink of starvation…

"Because those people left in the country are hiding in bomb shelters and subways, most of the stores are closed. But the transportation of food has also ceased, so those stores that are still open lack food and the shelves are becoming empty quickly. So, pretty soon people will start starving.”

One Ukrainian ECM worker shares how travel has taken on new meaning for him:

“I have always loved travelling…but since the beginning of the war all my former symbols of joy have been overshadowed by human suffering. Seeing a family with a suitcase now undoubtedly means that they are fleeing the war and not going on vacation. For many of them, this suitcase contains all their life; sad, bewildered, and detached.

We often talk here about our last day of ‘normal life’. I guess it feels therapeutic to relive it in our heads. On my last day of normal life, I finished creating two perfect travel itineraries - one for Croatia and the other for Switzerland, and just couldn't decide which trip to take first. Such a difficult dilemma, I thought! I couldn't have imagined that in a few days, I'd be arranging itineraries for refugees and using my travel experience to help people get to safety: ’Will the family with a newborn feel more comfortable travelling by direct train or by connecting flights?’; ‘Will this old lady be okay travelling alone or should I try to team her up with someone?"—who would have thought that these would become my new dilemmas?"

But there are some good stories in the midst of the terror. A Ukrainian ECM worker in Croatia shared the story of successful refugee retrieval from the Slovakian border:

“Three mothers and four children have been brought safely to Croatia. They are in safe houses being cared for by believers and overwhelmed by the love and care they have received. We are praying for our brothers and sisters who are right now transporting people in the western part of Ukraine, caring for them and meeting their needs. They are doing a great job in the Lord.”

ECM missionary in Romania, Jennifer Grocott says she’s been very impressed that the Romanian people have responded very generously to the refugees, donating time, money and food. She says the government has also responded well, and are offering free medical care for all Ukrainian refugees. Jennifer says their church has also been involved in coordinating supplies and relief for the refugees coming into the east of the country. She says it’s important to remember who is really in control in a situation like this…

“God is the only one that knows this situation entirely. Only he knows the complete truth and the hearts and minds of those making decisions. He knows and feels the pain of all those suffering and he promises to be close to those who are broken hearted. Only he knows what is going to happen and for how long and he is the only one who can ultimately judge.”

And, amid organising refugee itineraries, the Ukrainian ECM worker claims, “among all the heartbreak, you can still feel hope. You can hear people saying ‘We will be back soon, ok?’ Standing at a train station, I thought of wonderful and encouraging words Paul wrote to Philemon: ‘for I hope that through your prayers I will be given back to you.’ May it be through our prayers that millions of Ukrainian women and children be given back to their husbands and fathers soon."

"God is the only one that knows this situation entirely... He knows and feels the pain of all those suffering"

Praise God for our brothers and sisters in Eastern Europe and Ukraine specifically; for the sacrifices they are making every day for the sake of these broken people caught up in this horrible nightmare. Please be praying for them and for all the people who are injured, lost or grieving loved ones and the loss of their beautiful homeland; that they might know the comfort only the Lord Jesus can provide.

I only pray for us to continue to be strong and courageous, do not be frightened or dismayed. And that the Lord our God would be with us wherever we go. (Joshua 1:9)

You can support ECM's response efforts to the crisis here

This article is from ECM News Winter 2022